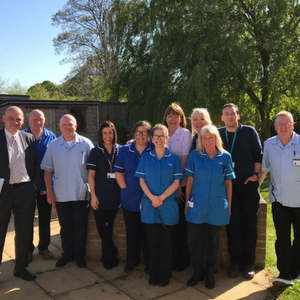 The Trust is celebrating after being announced as finalists in two categories for a prestigious national award.

The HSJ Awards, now in their 36th year recognise, celebrate and promote the finest achievements in the NHS and showcase them to the service’s most influential leaders. The awards are the most sought after accolade in British healthcare.

Mr Lawlor, who has also previously been listed as one of the top NHS Chief Executives by the HSJ, said:

I have always said that this is the best job I’ve ever done. It is my privilege to lead NTW and to work alongside 6,000 passionate, highly skilled and caring staff.

Mr Lawlor has been Chief Executive at NTW since June 2014, having moved to the North East in 2013. He actively campaigns and speaks out against stigma and supports action to ensure that mental health is treated as equally as physical health issues.

Under the leadership of Mr Lawlor NTW is one of only two Trust’s in the country to receive an outstanding rating as a mental health and disability care provider.

The shortlisted candidates will be interviewed with winners announced at an awards ceremony on Wednesday 22 November in London.