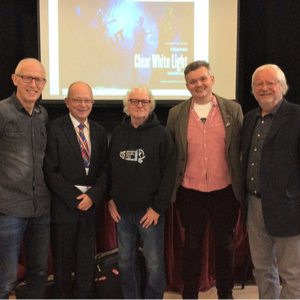 Fresh from their sold-out second run of the play ‘Clear White Light’ at Live Theatre, former Lindisfarne musicians Ray Laidlaw and Billy Mitchell and the play’s director Joe Douglas joined us in the Jubilee Theatre to celebrate World Mental Health Day. The event also marked the 150th birthday of St Nicholas Hospital, where the late Lindisfarne member Alan Hull worked and wrote many of the songs featured in ‘Clear White Light.’ The mix of discussion and song was led by David Faulkner, from local history group Fawdon and Coxlodge Together.

Joe Douglas opened by speaking about how the heartfelt power of Alan Hull’s songs drove the creation of the play’s story. Ray reminisced that Alan’s move away from pop music to songs with more meaningful themes coincided with the beginning of his work at St Nicholas Hospital, with an increasing amount of social commentary in his lyrics. The acoustic performance of ‘Winter’s Song,’ written by Alan while at the Hospital, showcased this perfectly.

The political message of the play was mentioned a few times, and Joe led a round of applause as a ‘thank you’ to the NHS staff present. David pointed out that the play’s first run was in 2018, the seventieth anniversary of the NHS, and Joe agreed that this was not a coincidence. Joe reflected on the ability of theatre to bring people together and focus attention on important issues. Live Theatre’s format, where the audience sit around tables rather than in rows of seats, helps to open up conversations between strangers after the performance has ended. Joe, Ray and Billy all agreed how important it is to encourage this in relation to mental health.

Joe explained that although the play is set in St Nicholas Hospital, it is an imagined version of the hospital, playing up to the gothic, spooky aspects of the building rather than being truly realistic. He revealed that set designers for the play had visited the hospital and taken inspiration from many of the architectural features to build ‘their’ version of the hospital’s interior.

David asked whether the play’s cast and crew had been hesitant about portraying the hospital in this way. Joe explained that although the poster for the first run of the play featured the hospital, the team decided to remove it for this year’s run. They didn’t want the play’s promotion to perpetuate the stereotype of present-day mental health hospitals as scary, imposing places.

The play is based on Edgar Allan Poe’s short story ‘The Fall of the House of Usher,’ with things getting increasingly strange and unsettling as the plot progresses. Ray reflected on some of the ways Alan was affected by his time working at St Nicholas Hospital. He revealed that Alan was “fascinated by the concept of sanity,” and joked that Alan had often said “there’s no such thing as sanity, just degrees of insanity.” Alan’s writing was often influenced by Poe’s stories, most notably in the song ‘Lady Eleanor.’ Ray and Billy’s acoustic performance of this song was hugely enjoyed by the audience, with plenty of us joining in the chorus!

Joe and Billy felt the second run of the play has brought a new depth to the characters portrayed. Although Billy joked that he has been ‘typecast’ as an old, ‘curmudgeonly’ patient, he also praised the subtle way in which the nurse and patient characters built a relationship despite the strife between them in the play. “It’s what would happen, isn’t it?” he said of the gradual building of ‘smiles and looks’ between his character and the student nurse caring for him. He reflected that it made the experience of the role much more ‘satisfying’ and human. Billy and Joe felt this was largely thanks to a lot of exploration and accurate research by the actors of their characters’ mental states at different stages of the plot.

Joe emphasised that the team had wanted the play to leave people feeling hopeful, and read a short extract from the close of the play where the central character, a student nurse, reflects on her experiences. The audience were clearly moved by the closing line, “my scars show where I’ve been, not where I am going.” This was followed by a rousing rendition of ‘Clear White Light,’ the inspirational song that gives the play its name.

We would like to thank Billy, Ray, David and Joe for their time and a thoroughly interesting, inspiring event!

Billy is performing in a touring production of ‘The Pitmen Poets’, with dates across the North East during November. Visit https://thepitmenpoets.co.uk/tour for tour dates and details.

Ray and Billy also encouraged people to come along to the Sunday for Sammy fundraising concert on 23rd february 2020. This unmissable event raises funds to support the next generation of North Eastern performers with training, expenses and equipment. Billy promises some spectacular surprise guests on the night!