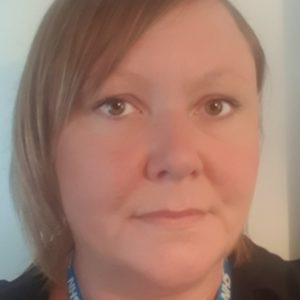 Kelly is currently on a six-month secondment from Central Community Services where her previous role was as a pathway manager working in the Working Aged Adults community treatment team in Gateshead.

Her current role is extremely varied and some of her responsibilities include providing clinical and professional leadership to support team managers and community teams in providing the highest possible quality care. She attends Trust-wide meetings and provides mentoring for staff.

Since joining the Trust in 1996, Kelly has had a variety of roles beginning her career as a nursing assistant at Prudhoe Hospital in what was then known as a challenging behaviour ward.

When the unit unfortunately had to close due to the redeployment of services at Prudhoe, Kelly moved to the prison services working at HMP Frankland and HMP Durham where she was the clinical lead and non-medical prescriber at the prison’s drug and alcohol services.

Kelly describes her move to the prison services as a culture shock but something she found extremely interesting. She moved back to CNTW in 2013 working in community mental health teams in Newcastle.

“I’ve loved all the different roles I have done throughout my career,” Kelly said. “Working in different areas has given me transferrable skills that I have been able to utilise in multiple roles.”
For Kelly, working in a supportive team and being able to make a difference are the things that make the job worthwhile.

She added: “I find being able to support the teams on bigger campaigns such as the flu vaccines and physical health to be really rewarding.”

Kelly believes that recruitment and retention is the most difficult challenge facing learning disability nursing. She said: “There are small numbers doing training and mental health nursing has always appeared to be a more attractive profession.