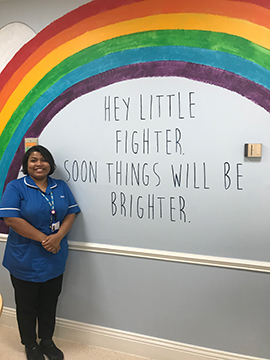 Registered nurse Monica DSouza says working for Cumbria, Northumberland, Tyne and Wear NHS Foundation Trust (CNTW) is a far cry from her former job as an assistant professor in Mumbai.

In August 2018, Monica, 35, swapped her life in India for one in Newcastle, despite having never been to the UK before.

In May 2017, Monica met with representatives from CNTW for an interview in India and just over a year later she was in the UK working as a nurse and living in a house share in Heaton.

Following that initial interview, Monica was told she had been accepted for the role a few weeks later and that’s when the process began. She says the process of moving “couldn’t have been easier” and that the Trust were there to support her from the very beginning.

Back home in India, Monica had to do a computer-based exam and English language tests before applying for her VISA and moving to Newcastle. She says what could have been a stressful time was made easier by the fact she knew she could talk to people from the Trust whenever she needed.

It wasn’t long before Monica was living in Heaton with other nurses from India, something she found extremely helpful. “To be living with other people who were in the same situation and who were from the same background helped put me at ease”, she said.

They may have moved out of their house share now, but Monica and the nurses she lived with have remained friends for life, regularly meeting up at church and for their children’s birthday parties. They even have a WhatsApp group.

Monica loved Heaton so much that she still lives there now with her family, who are all settling in very well.

Fifteen months on, Monica is now a fully-fledged member of the team at the RVI’s Richardson Unit. She said: “From day one everyone has been very supportive and I have made lots of new friends here.”

The team operates an open door policy which Monica says means she can approach her ward manager about anything, even allowing her to go home over the busy Christmas period to surprise her family.

Since uploading her CV onto an online jobs portal in India, Monica has never looked back. She said the opportunities on offer at CNTW are endless, from training for further qualifications and developing her skills to the option to move jobs internally.

Monica says she wouldn’t have settled as well if it wasn’t for senior nurse and international recruitment and relocation officer, Sheryle Cleave, who supported her throughout the move.

She said: “Sheryle is a real-life angel. I found it hard to begin with as I was here without my family but she was always checking to see if I was alright. It was reassuring to know I had someone looking out for me. Sheryle gave me a ray of hope.”

Monica has also praised her ward manager Tracey Welford for helping her settle. “Tracey has made me feel like a valued member of the team. She has always made me feel comfortable and has been a pillar of support.”

Monica now has a great balance between her work life and social life, “I can see myself living and working in the area for a very long time.”